July 14, 2020 ||  KA Imaging has taken a revolutionary step forward in the most significant screening method in the world: the x-ray. Their development of a dual-energy color x-ray technology, Reveal, is paving the way for enhanced diagnostic ability with portability and mobility. 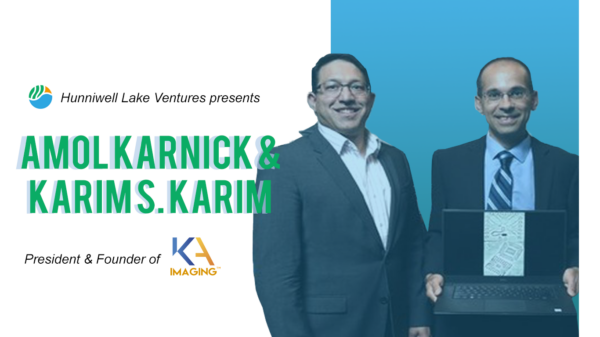 Amol Karnick is the CEO of KA Imaging and a seasoned executive in the medical device industry. His experience covers the whole spectrum; from start-ups (Ultrasonix, Sentinelle Medical, Ventripoint) to large OEMs (GE Healthcare). Entering into the profession with a Bachelor’s in Engineering from UW and a Masters in Electrical Engineering from McGill, Amol spent 20 years in the medical imaging space to become a leader of multidisciplinary teams (sales, engineering, and operations). Amol is now poised to steer KA Imaging into a position of global leadership.

Karim S. Karim is the CTO at KA Imaging. A professor of Electrical and Computer Engineering at the University of Waterloo, Dr. Karim is a distinguished academician known for pioneering and commercializing large area current mode active pixel sensor technology that is now used in bio-metric fingerprint readers for mobile phones. With 20 years of experience in designing and prototyping large area digital imagers, Dr. Karim has been instrumental in raising over $12 million in research funding. A full member of the American Association of Physicists in Medicine (AAPM), Dr. Karim is also an IEEE distinguished lecturer.

Tell us about yourselves and your backgrounds.

Amol: My name is Amol Karnick and I am president, CEO, and co-Founder of KA Imaging. I studied electrical engineering at the University of Waterloo and later pursued my Masters at McGill University. I started working at GE Healthcare as part of their Technical Leadership Program and stay at GE for almost 8 years. I later moved on to the start-up world and was involved in multiple companies based in Canada and the USA, in different leading and executive positions.

Karim: My name is Karim S. Karim, and I am the CTO at KA Imaging. I’ve been connected mostly through universities and have worked in commercializing technologies and earned my MBA at the University of Toronto. I had success with several devices I built early in my career, I supported a company in the United States building ultrasonic fingerprint sensors for the FBI, and the biometric sensor devices ended up in the Samsung S10s.

Tell us about the founding and mission KA Imaging.

Amol: When I was a healthcare executive-in-residence at Communitech, I met Karim, who is a professor at the University of Waterloo. Karim later reached out with innovative ideas in the x-ray field, and our partnership began in 2013. Initially, we incubated the idea at the university to allow it to mature to a state ready for commercialization. By the end of 2015, we had successfully raised some and were able to expand out of the university to become KA Imaging.

Karim: From its beginning, KA Imaging has centered around a strong social mission: low cost and high value medical diagnostic devices for low and middle-income companies, specifically for tuberculosis and pneumonia screening. Over two billion people get x-rays every year, making this screening method by far the most significant imaging modality deployed for medical technologies, and approximately 60% of x-rays are used for pulmonary imaging. However, conventional x-ray has a weakness: it cannot pick up soft tissue properly. With our innovations in dual-energy color x-ray technology, we have allowed regular x-rays to do soft tissue differentiation and improve visualization. This technology is a revolutionary step forward for an x-ray. Thus, in 2017, KA imaging pivoted towards innovations and research in dual-energy color x-ray technology. We call this device Reveal.

How has KA Imaging pivoted due to COVID-19?

Karim: Our dual-energy and colored x-rays allow for enhanced visualization compared to a normal x-ray. Our initial strategy with the dual-energy and colored x-ray was to target screening lung diseases, such as lung cancer, tuberculosis, COPD, and a collapsed lung. Since COVID affects the pulmonary system, we could easily pivot KA Imaging towards developing COVID-19 solutions. We have a 600-person trial that is starting in Toronto that consists of COVID-positive patients. Through this study, we are comparatively assessing the efficacy and accuracy of our x-ray screening method to PCR and CT, as well as monitoring COVID through its disease progression to enhance decision making.

Has your relationship with regulatory bodies changed since COVID?

Amol: Our relationship with the FDA has not changed significantly since the onset of COVID-19. We’ve already submitted our 510k, and it is currently under review. We have found Health Canada to be quick and responsive to COVID-related research during this outbreak. With our COVID-19 trial, we submitted an Investigational Testing Authorization (ITA) before we started our trial, and Health Canada responded to our ITA within a week.

Have you observed any changes in the investment and Venture Capital space due to COVID-19?

Amol: We have not observed any significant changes in the investment space since we are starting a round of funding now to accelerate our COVID-related product through development. We have enough capital to sustain our company for a year. Based on conversations with other entrepreneurs in the space, I noticed a trend that VC investments had slowed down for about two months to assess the impact of the pandemic, but it seems like VC investments are on the rise again.

Amol: We have always looked towards global markets, and two of our investors are internationally based in Taiwan and Japan. We understand the need for healthcare innovation in developing countries and have MOUs for distribution in China and Latin America. In order for us to successfully expand, FDA clearance will be crucial because many countries look at the FDA as a leading global regulatory agency.

Additionally, there is a large need for digital x-rays in developing countries because many of these hospitals do not have access to CT scanners, especially those with large rural regions. Many of these countries also have a higher percentage of smokers, which leads to an increased prevalence of lung diseases and cancers. Our product can not only help with this diagnostic side, but also elevate preventative medicine methods.

Karim: Globally, there is also an interesting opportunity to create mobile x-ray scanning services. For patients in the ICU, a mobile x-ray machine is the preferred option because the CT scan is a large stationary machine. For indigenous and rural populations, access to integrated healthcare systems is often non-existent. Moreover, for those vulnerable, home-bound, and contagious patients, having access to a mobile x-ray screening is key. This is where KA Imaging comes in and could provide x-ray imaging on-site. We are giving enhanced diagnostic ability with portability and mobility.

What other products has KA Imaging developed?

Amol: Our dual energy (color) x-ray technology actually has a range of applications beyond humans. Veterinary care also runs into the same issues, and our product can also improve the visualizations in industrial applications by differentiating materials. We also have developed the world’s highest resolution x-ray detector and a full micro-CT system at a benchtop size and have sold two of these systems to the National Research Council of Canada for material science research.

Have you experienced any supply chain disruptions due to COVID-19?

Amol: We have been fortunate to experience relatively minor supply chain disruptions due to COVID. Our manufacturers in Taiwan have maintained consistent production levels.

What is the next step for KA Imaging?

Amol: Our next step is to get regulatory approval for our dual-energy (color) x-ray device. We are anticipating that we will have our 510k before the end of the year, which will allow us to prepare for the next wave of COVID cases. We, therefore, expect that the next 4-6 months will be focused on COVID manufacturing and delivery. In the next few years we will work to gather more adoption data to prove the safety and effectiveness of our product, develop our global strategy for distribution set-up and sales, and work on preparing our device pipeline for future innovations. With our advanced x-ray technology, we hope KA Imaging can become a leader in improved x-ray visualization for COVID-19 diagnostics and additional applications.